If you have opened any social media in the past week, all you could see was “ChatGPT this,” “ChatGPT that,” or “ChatGPT now.” While undeniably innovative and exciting, ChatGPT might have a dark side that you’re not seeing yet – “aigiarism.”

It’s undeniable that ChatGPT has taken the internet by storm, claiming more than 1 million users in a short span of 5 days.

ChatGPT is a well-known large language model (LLM) developed by OpenAI. It has 175 billion parameters, making it one of the most significant language models ever created. It is capable of generating human-like text and can perform a variety of tasks, including translation, summarization, and writing code.

Such developments have been a genuine concern for academic integrity, and now those concerns are a reality.

To further explore these concerns, we must first understand what Aigiarism refers to.

Plagiarism, as referred to many times in our blogs, is taking someone else’s work and presenting it as your own.

There are no tweaks and neat tricks on what plagiarism truly means – it’s the line above, and that’s all there is to it.

So, when you take free content generated from an AI, it falls in the category of ‘not your work,’ and by presenting it as your own, you’re committing plagiarism.

The word “Aigiriarism” exists as a result of AI advancement. Since ChatGPT has made the tour worldwide, people have noticed that they could use it to generate free content for papers, articles, and other written forms. You have to ask the AI, just like a human, what the report should be about, and it will start generating content for you.

Therefore, aigiarism is directly committing an offense to academic integrity and is considered – not unfairly – straight plagiarism.

There are limitations – 650 words per ‘session’ to be precise – so you’ll have to keep getting content from it continuously. But still, it’s not stopping the process at all.

Who coined the word “Aigiarism”?

The word came into existence from the necessity of having a term that describes the process of using AI to generate content that would otherwise have come from a person and present them as their own.

The word was initially coined by Mike Waters on a thread on Twitter back on October 27th and has never been more relevant.

What are recent developments that contribute to Aigiarism?

The most significant contributor to Aigiarism is OpenAI, with the latest release of ChatGPT or, as many refer, the Google killer.

People have been starting to use it more and more and committing Aigiarism on a significant level.

Not leaving themselves behind at all in this race are

The more option there are on the market to get free content, the higher the number of users will be, and the less original content will be used and published.

Academic integrity issues arise from the use of AI-generated content.

Originality and academic integrity are foundational standards in the academic world, and duplicating someone else’s work and presenting it as your own is considered plagiarism and a serious offense – as it should be.

Artificial intelligence, on the other hand, has made it simpler for people to swiftly and cheaply produce enormous amounts of material using ChatGPT. However, using AI-generated content may make it simpler for individuals to plagiarize.

Such practices threaten academic integrity because, as long as there is no proper solution to detecting AI-generated content, the papers and documents might go undetected and be accepted.

One effective way of determining whether AI has written the content is to analyze the text for stylistic irregularities or strange trends in style.

Also, AI-generated text may use rare words or phrases that are incorrect for the context of the text or repeat words or phrases more frequently than expected in typical academic writing. Such pitfalls were pointed out by Heather Holleman – Professor at Penn State, in a tweet where she says, ” College professors don’t need to worry; the essay contained mostly weak verbs and no advanced grammar” while explaining her experience with ChatGPT results.

Additionally, text produced by AI might have a different level of consistency and logic than human-generated content.

Is anyone working on a solution?

Upholding academic integrity has mainly been a race for higher accuracy in similarity checking and not dealing correctly with threats from AI advancements in translation and content writing.

Knowing that these are considered direct threats to academic integrity, we at Crossplag have started working on making a shift from the similarity index to the severity index.

What is Crossplag doing about this?

AI threats to academic integrity have our full attention at Crossplag. Hence, we are proud to say that we are the only cross-language (translation) checking solution in the market. We understand this is just the beginning and that there is a long way to ensure originality in writing, including the ability to identify whether an AI or a human has written a piece of content.

Therefore, conducting such content analysis and many other essential checks is necessary to introduce a new standard for upholding academic integrity and ensuring originality. We are calling that standard; severity index.

The severity index, as a concept, aims to become the gold standard for upholding academic integrity as it is built for more flexibility and evolution as technology advances. In essence, the severity index is an AI-based document irregularity evaluation that is based on the following checks, measurements, and analyses: 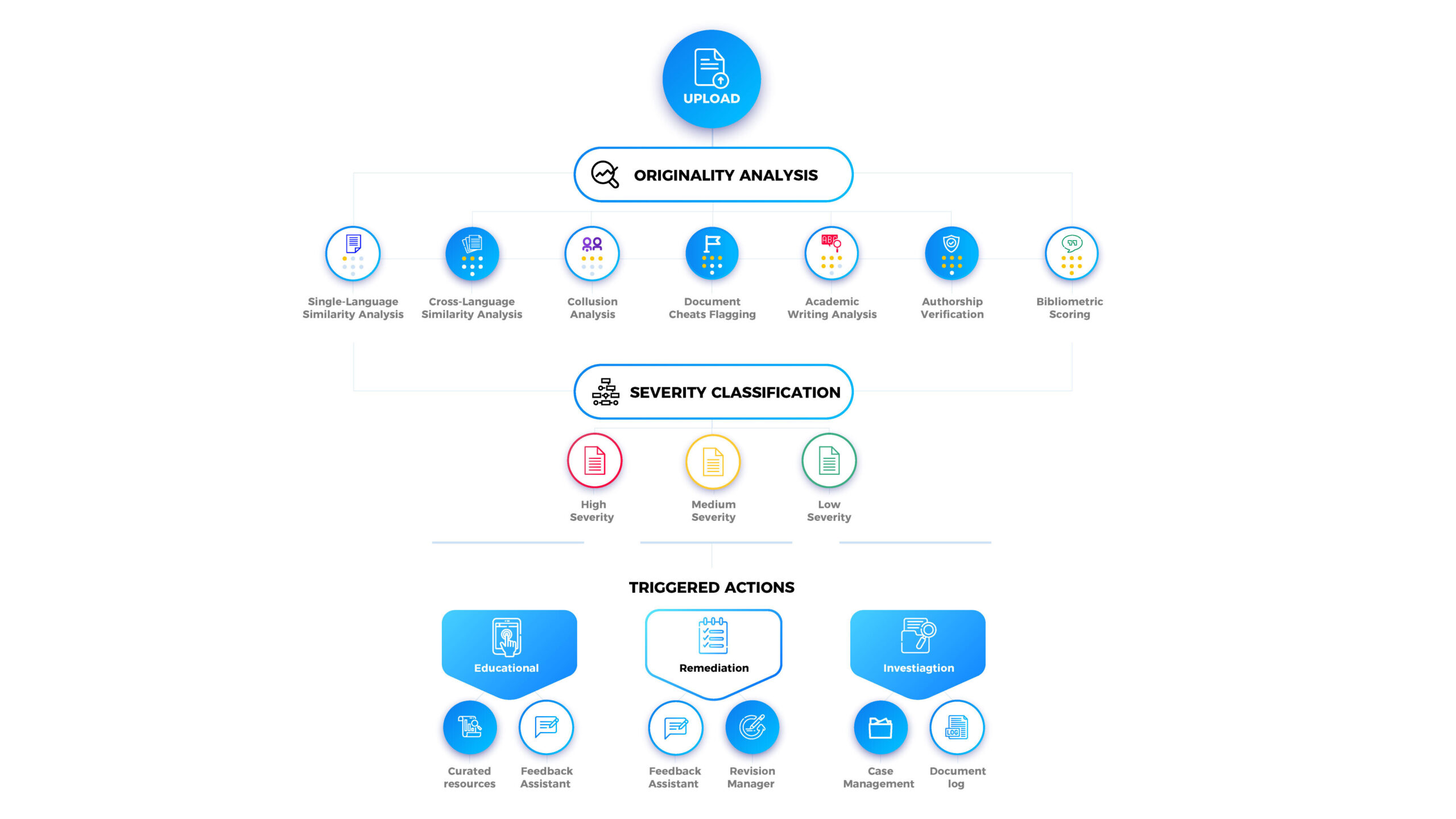 Single-language similarity analysis focuses on finding potential similarities with all documents written in the source language. An example would be an essay written in English and checked against all available content in English.

Cross-language similarity analysis focuses on finding potential plagiarism with all documents written in the target language. A perfect example for this case would be an essay written in Spanish that is checked against all available content in English.

Collusion analysis is a similarity analysis conducted at an assignment level for all assignments submitted, which tries to identify if students have potentially colluded together in writing a specific project.

Document cheats flagging identifies parts of the documents that can be considered “cheats” that aim to bypass the software, including images, white characters, hidden text, and many others.

Authorship verification aims to identify cases where the document poses traces of it being written by other people (contract-cheating) or whether it was written by an AI (software-generated text).

Bibliometric scoring aims to evaluate the document in two aspects; whether the author has used proper citation style and format across the document and evaluating the quality of references used to write that paper.

Based on the above analysis and measurements, we are working on utilizing our proprietary AI-based classification system that identifies the severity of each analysis and measurement to classify each document into one of the three categories: high, medium, and low severity, which would drastically simplify the evaluation process for educators.

Introducing such a disruptive technology and other academic integrity features, we understand that it requires working closely with the educational and research community across different cultures around the globe. Hence, we are looking for individuals, institutions, and other educational technology companies to join us in the journey of making the world a better place by improving how our society upholds academic integrity and ensures originality.

Copyright © 2022. All rights reserved by Crossplag™